To share your memory on the wall of Richard Freyhagen, sign in using one of the following options:

Rick is survived by his wife, Donna, his two daughters , Marissa and Stephanie, his stepson Chris and wife Carrie, stepdaughter Lauren and his grandkids Rylan, Everly, Juliana, Vinny and Olivia, his sister Cathy Catania and husband Frankie, their two daughters Nikki and Lexi and his brother Jeffery and wife Kim and their kids Jeffery , Chris and Nicole.

At this time due to Covid, we will not be doing any services. We will have a celebration of life in the coming months in honor of him.

-in lieu of flowers, please donate to St Judes. Rick supported St Judes and donated to them often. ”
Read Less

Receive notifications about information and event scheduling for Richard

Consider providing a gift of comfort for the family of Richard Freyhagen by sending flowers.

We encourage you to share your most beloved memories of Richard here, so that the family and other loved ones can always see it. You can upload cherished photographs, or share your favorite stories, and can even comment on those shared by others.

Posted Dec 31, 2020 at 07:48pm
Some understand and some don't. We always shrugged it off. No matter what the circumstances we always found our way back. I wish somehow I could have saved you but only you and I will ever really know the truth. If we are cruising by next year I will take you on our cruise with me and celebrate as we planned. I promise to donate to St Judes like we always did and hope that anyone reading this will do the same in your honor. I love you and will miss you always.
Comment Share
Share via:

Posted Dec 31, 2020 at 06:08pm
Rest in Peace My Friend, Robin and I will miss you. An awesome drummer, and an awesome friend. Our thoughts of you will always be of a caring compassionate family man, a fiercely loyal friend, and a consummate musician who cared about the people he worked with, and the people who cheered for him from the other side of the stage, Rock on Brother!
Comment Share
Share via: 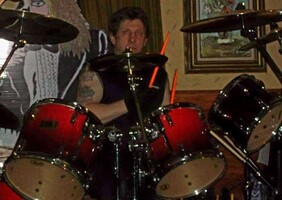